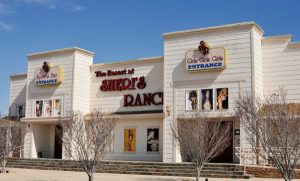 Nevada – a state in which prostitution has been considered a necessary service industry since the days when the place was populated solely by prospecters. The only place in the US where brothels are legal. In 2007 ” The Guardian”  has published critically analyzing article about the Nevada’s legal escort and brothels    and their safety.

Now we have another story from ex- escort girl in one of the legal brothels.

Anna, 28, was for the last two years at a legal brothel located in Las Vegas. Escort service is legal in Nevada but only in the 24 licensed brothels in the state. The one of Anna very famous brothel, having been featured on the TV show Gene Simmons Family Jewelsand on a BBC special about legal prostitution. Another brothel in Nevada, Love Ranch, was seen in the news this week after Lamar Odom had a drug overdose there.

I started my lob in the strip and escort clubs when I turned 26. I danced nude,  also topless throughout my career as a dancer. I did that and then took a month of a break. Then I returned back to the strip clubs, but economy had taken a little bit of a dip so without options to make the amount of money that I was accustomed to make and live a good life, I had to compromise. I thought,  what else am I going to work and  going to make good money to live? I have customers  established throughout time as a stripper that want to take me outside the strip club and have sex with me, and I was little nervous to do it because it’s not legal. But  there are men willing to pay for my escort service outside of the strip club and that made me think, could I do this legally? That’s how I applied as escort girl in Nevada brothel, in Las Vegas.

When I come in, I was told to fill out all my paperwork and go to the doctor (we do get tested every single week, blood tests and test for all the STDs). I was clear, so nowgo to the sheriff to receive my sheriff’s card. Once you’ve done that, you’re teamed up with a big sister and she shows you around the house, gives you the rules and bar etiquette, then when you have your first tour, she goes with you to make sure you know what you’re doing when you’re talking to the customers about the house.

Work time : 12-hour shifts: 5 a.m. to 5 p.m., and then 5 p.m. to 5 a.m. We draw for our shifts so you don’t really get to pick. But you usually get what you want because you can switch. We are required to stay a minimum of one week, but I stay more at a time. In my time there, I check my email box, go to the gym, or just relax by the pool or Jacuzzi. I like to go home for about two weeks then come back.

In the bar when customer comes in, we know if he has an appointment or is open. All the girls who are on the floor get a chance to speak with him and try to get him to go to their rooms to negotiate. Negotiate of our prices outside of our bedroom doors is not allowed because is ilegal, so we try to get them to come to our room. You have 10 minutes to convince them and try to get them to come back with you. After 10 minutes are up, you have to give that person an opportunity to meet with other girls. It’s like speed dating. Once your time is up, you’re not allowed to go back and talk to them. They will have to request you to come back and sit down for more time. We are independent contractors [and each negotiate our own price].

I really don’t get into specifics at the bar about what kind of party they’re interested in. I always try to get them to take a tour of the house with me so I can show them the different specialty rooms. You kind of get a feel when you’re on the tour, and it’s just you two and not 50 people in the bar listening and watching; they feel a little bit more comfortable talking. When you show them different specialty rooms, they’ll tell you, “Oh, this is something I’m interested in,” or, “This is not what I’m here for.”

There is a Jacuzzi room. It’s solely for relaxation. We don’t allow any sex in the Jacuzzi. It’s good for before or after a party to unwind, or to take the pressure or any nerves off. We also have a bubble bath room, which is romantic. We have an S&M dungeon, which is pretty cool. When you take them into that room and you see their initial reaction, you can tell whether or not they’re interested in that. It’s our wow room; everyone’s interested to see it. Some people are very intimidated by it, so it’s not for everybody.

Amount of couples come in, and couples want you to interact with both of them, or the wife just wants to watch, sometimes the husband wants to watch. The most important thing I have to do is to make sure the woman is comfortable — she’s the priority. The funniest is when somebody wants to tickle the bottom of my feet. I am ticklish, so when somebody wants to see your feet wrinkle up and tickle the bottom with a little feather, it literally is hilarious. The best experience is when the [men’s] faces light up, seeing the same guys over and over again. Knowing that they come back to see you because you gave them such a memorable experience is so heartwarming and humbling to me knowing I can make a difference to somebody.

We get a variety of different types of men. They come from all walks of life. You have businessmen, blue-collar, white-collar. You have it all. I don’t like to ask them about whether they’re married when they’re here. If I see a wedding ring, to each their own. I don’t ask them, because they’re not here to talk about their marriage. But I would say about half are married.

Businessinsider also wrote in 2013 about experience of a man visiting the escort brothels. “Women seeking work at Sheri’s need to be licensed independent contractors for the state of Nevada and complete an application process with the Ranch. You can see the escorts application page here. They request nothing more than a few photos of your face and body, but it’s difficult to stand out on that alone” he says.